Well the last time I built a computer was in the 1990’s and the first Pentium had just been released but for a utter computer noob it worked well. Since then I discovered the joys of Apple computers and escaped the annoyance of Windows computers…

Since starting a Building Design Course (architecture for bogans) and becoming interested in CAD, CNC and CAM MACs just don’t cut it as very little of this type of software will work on them:(

I priced a MAC Pro as an option but they are way too expensive:(

Solution – Old bloke and computer noob builds a MAC Pro killing super computer/workstation. How hard can it be?

Second – buy lots of bits from PC Case Gear, these blokes have excellent service and are very easy to deal with.

When it is all put together it looks like this. 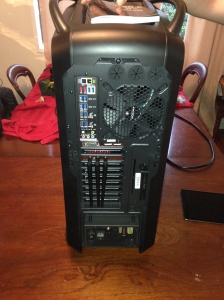 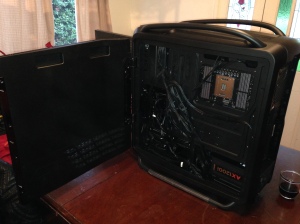 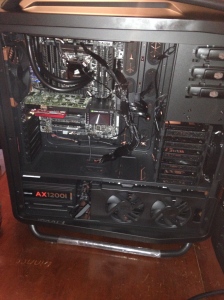 It is huge, very fast and runs very cool and has lots of room to be expanded and upgraded. It amazingly started first go!! The lights in Bungendore did flicker a bit though when it was turned on. To give you an idea how big it is the little table it is sitting on is 1200mm wide and 2600mm long.

Angus who has just finished his Honours in Computational Science and has been nominated for the ANU University medal and is definitely not a computer noob was a great help, Callum supervised and my lovely Jo tolerated the kitchen table and our crowded house been littered with computer parts.

And yes Archicad, AutoCad Inventor, AutoCad and SketchUp run like a dream and look great on The ASUS PA monitor!!

All in all not particularly difficult to do and all for less than the price of a MAC Pro.

This entry was posted in Cool Tools and tagged Computer Build. Bookmark the permalink.

Exploring sustainability in Sydney, and down south

tubes for the noobs in us all