Well at 0700 this morning I received an email that the steel wall frames were on their way. Panic stations as the road was not quite finished. Out to the farm Callum and I went and luckily the road was drivable up to the house site. But no, the earth movers arrive at about 1030 and proceed to dump truck loads of road base from the entry along the road before I could tell them a truck was arriving. Oops. 5min later the steel arrived. Double oops.

After a short wobbly detour across the paddock all was good. Whew.

The driver said it wasn’t the worst site he has delivered too. He did one last week near Falls Creek that took 2 hours to go the last 5km.

Our food forest is coming along. We now have 4 chestnuts, an apricot, 2 mulberries, a pomegranate  and a plum tree planted, with a peach and 3 figs waiting to go in the ground.

The wall frames and most of the roof trusses arrive. 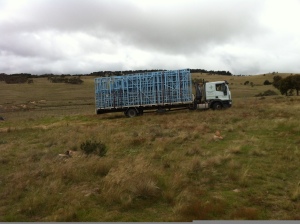 Half our house on the ground, it doesn’t look that big 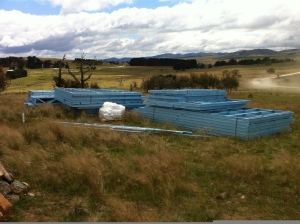 Wild Flowers in our paddock 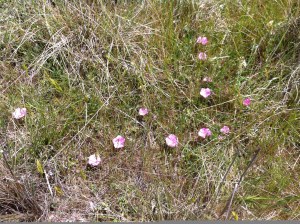 It is the 50th anniversary of the Parks Radio Telescope. Here is a very special picture, courtesy of the ABC 7.30 Report,  of Jo’s boffin Pa, complete with pipe, at the telescopes controls which he came from the UK to build – Taffy Bowen helped a little. Some would say that Sam Neil’s character in the film The Dish was based on him. I can say how chuffed Jo was that her dads contribution was acknowledged on the telescopes anniversary. 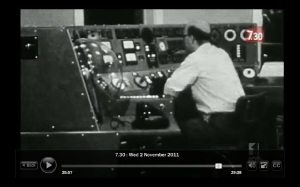 This entry was posted in House and tagged House Frames, Jo's Dad. Bookmark the permalink.

Exploring sustainability in Sydney, and down south

tubes for the noobs in us all